How to Choose a Workers' Compensation Attorney 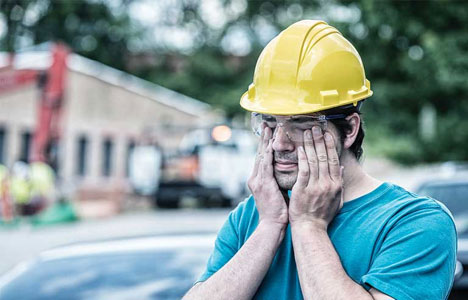 For many people struggling to cope with the pressures of life in a 24/7, on-demand world, sleep gets relegated to the bottom of their to-do list. Sleep is sacrificed to squeeze in an extra hour of productivity, or because rest time is equated with wasted time.

“A large percentage of the U.S. workforce is fatigued on the job,” said Claire Caruso, a research health scientist at NIOSH.

Data from 2010 published in a Centers for Disease Control and Prevention Morbidity and Mortality Weekly Report in 2012 shows those percentages were even higher in certain industries, and especially among night shift workers:

Chronic fatigue is more than just a quality-of-life issue. It’s estimated that about 13% of workplace injuries can be attributed to employees with sleep problems, and 21% of fatal crashes may involve a drowsy driver. Tired workers are more likely to be involved in an incident or get hurt at work.

A study conducted by researchers from Colorado State University published online on November 29, 2019 in the Journal of Occupational Health Psychology found a definite link between poor quality sleep and an increased risk of workplace injuries in construction workers. Workers who reported more insomnia symptoms, on average, experienced more “cognitive failures” – such as lapses in attention, memory or action – at work. More failures were related to an increase in minor injuries and a reduction in required and voluntary safety behaviors.

Among the cognitive failures:

We are biologically hardwired to be active during the day and sleep at night. Shift workers are particularly at risk because they are expected to sleep during times when their biological rhythm drives them to stay awake and work at times when they have a profound urge to sleep.

A study by the Liberty Mutual Research Institute for Safety, published in the American Journal of Industrial Medicine in 2006, found that compared with morning shifts, workers with afternoon shifts had a 15.2% increased risk of injury, while those on night shifts had a 27.9% greater risk.

Night shift workers also have a higher incidence of car crashes (especially during their ride home), as well as serious long-term health outcomes such as obesity, diabetes, cardiovascular disease and cancer.

The Liberty Mutual study also found the likelihood of injury grows once a worker’s shift exceeds the eight-hour mark, with a 13% increased risk at 10 hours and a 27.5% increased risk at 12 hours. Longer shifts have been linked to errors in decision-making and lack of attentiveness.

If you or someone you know has been seriously injured at work, the experienced lawyers at Sadow & Froy can help! Call us today for a free consultation. Our job is to look out for you!