How to Choose a Workers' Compensation Attoney

The Travelers Companies Inc., the country’s largest workers’ compensation carrier, recently released its Injury Impact Report, which identifies the most common causes of workplace accidents and injuries. Businesses spend $170 billion per year on costs associated with work related injuries and illnesses and these findings provide critical insight on how the numbers add up. Roughly 3.7 million workers are injured every year ins all public sector and private businesses in the United States.

Travelers analyzed more than 1.5 million workers’ compensation claims filed between 2010 and 2014 from a variety of business sizes and industries and discovered that the most frequent causes of workplace injuries included:

These incidents most often resulted in strains, sprains, cuts, punctures, contusions, inflammation, fractures or chronic sicknesses resulting from a type of work (e.g., a skin disease caused by chemical exposure). On average, strains and sprains resulted in 57 missed work days, followed by cuts and punctures at 24 days. Of the most common injuries, inflammation and fractures caused the most time away from work at 91 and 78 days, respectively.

Analysis of the workers’ compensation claim data revealed that certain causes of accidents and resulting injuries were more prevalent in some industries than others.

While material handling accidents were the top cause of injuries overall, these especially were common in the manufacturing and retail industries, causing nearly 40 percent of injuries in both sectors.

The injuries with the highest average incurred costs included amputations, dislocations, electric shock, crush and multiple trauma injuries, such as breaking multiple bones at once. These severe injuries typically occurred with less frequency.

The workplace injury data is particularly relevant in areas like construction and manufacturing where more jobs are projected to be added in the coming months. A very sobering statistic is that more than one-quarter (28 percent) of injuries occur in the first year of employment. 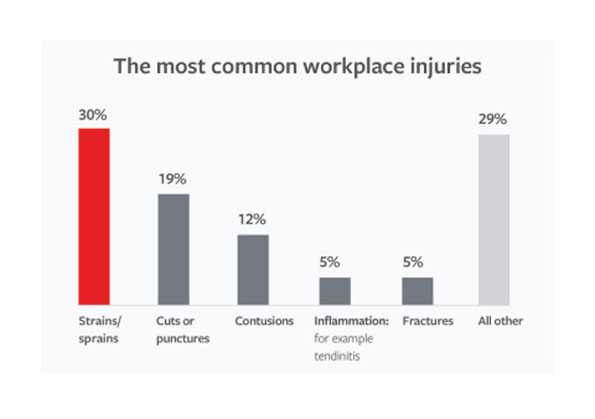